Power your inbox! Get plant-based recipes and more to fuel your days. 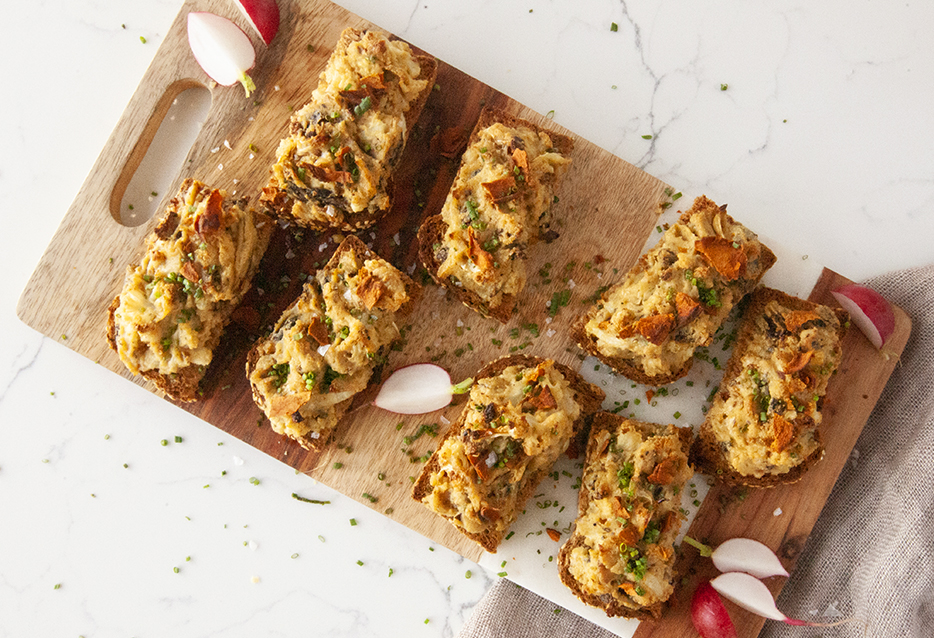 Popular recipes for cheesy cauliflower toast aren’t exactly health-forward. Our recipe for Vegan Cauliflower Toast on Sprouted Whole Grain Bread takes a luxurious, indulgent, taste-over-health classic and transforms it into a better-for-you version that tastes just as fantastic. Surprisingly simple to make and totally delicious, this vegan cauliflower toast recipe gives you the goodness of sprouted whole grains and healthy, plant-based ingredients without leaving flavour behind.

We found creative ways to emulate flavours and textures in this popular recipe that don’t have an easy plant-based equivalent. But flavour profiles can be built from more than one angle if you bring a little creativity to the kitchen! To capture the distinct nuttiness of the gruyere cheese in the original classic recipes, we used our high-fibre  Squirrelly Bread™ for our vegan cauliflower toast. Why? Because it’s made from sprouted whole wheat and packed with sunflower and sesame, Squirrelly Bread has a lovely nutty flavour when toasted or grilled.

Other ways we got creative? We traded the texture and smokiness of traditional bacon for plant-based options. The vegan jerky in this recipe infuses a smoky richness and some toothy texture to balance the creaminess of roasted cauliflower and cashew cheese. Vegan bacon adds an additional layer of texture to round out our healthy re-do.

Making our Vegan Cauliflower Toast on Sprouted Whole Grain Bread is easy! Simply roast, toss, toast, top, and serve. This recipe is so tasty, your kids will never notice it’s covered in veggies. (But we won’t blame you if you save this as your secret snack recipe for grown-ups’ night in!)

Get more healthy, plant-based, sprouted whole grain recipes by following Silver Hills Bakery on Facebook and Instagram. (Want to know why grilling and toasting brings out the nutty best in sprouted whole grain bread? Sign up to get our Why Sprouted Handbook to find out!)